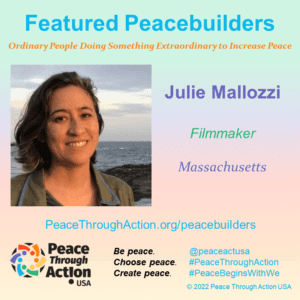 Peace Through Action has selected Julie Mallozzi as a Featured Peacebuilder because of her work documenting stories of people engaged in peacebuilding, including family members responding to murders of their children with restorative justice practices.

Julie Mallozzi, MFA, of Massachusetts, is a documentary filmmaker whose work explores the transformative power of traditional cultural practices in the contemporary world. Her films have won awards at festivals around the world and screen in museums, universities, and on public television. Mallozzi also collaborates with other filmmakers as an editor, story consultant, and producer and occasionally creates media for non-profit organizations.

Mallozzi grew up with a Chinese-American mother and an Italian-American father in rural Ohio – where her family managed a Native American historical site for 20 years. She holds a Bachelor of Arts from Harvard University and a Master of Fine Arts from San Francisco Art Institute. Mallozzi has taught at Massachusetts College of Art and Design, Boston University, Rhode Island School of Design, and Harvard University, where she is currently administrative director of the Film Study Center.