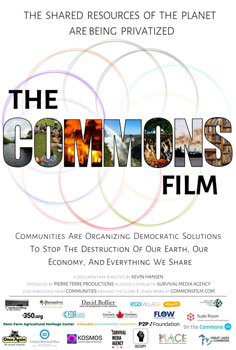 Join us for our Peaceful Viewers free virtual event featuring the film THE COMMONS FILM. Watch our streaming of the film from the comfort of your personal space. Then join other viewers for an informal discussion about the film.

About THE COMMONS FILM

From the Filmmakers: During the making of the film, we found a re-awakening in progress. Tired of waiting for government, many Commoners are taking action to push back the tide of unjust privatization or the destruction of shared resources. Similarly, people are working democratically, money is being re-imagined, new schools starting, co-operatives launching. Many – most – with the new idea of ‘Open Source’ deeply embedded in their planning. People are asking for sustainability, not destruction, sharing not privatization, and justice – not brutality.

And also, nine years in the making, we listened as 49 communities in the Americas, Europe, Africa and south Asia told us what has made their Commons work over the centuries.

In conclusion, We found that commons-based inspiration flows through people, especially young people, telling them not to settle for less than what they know is possible: to make that incredible future they see just ahead of humanity: vitality, goodwill, sharing – what Dr. Andreas Weber describes as ‘Enlivenment’ we found there are already laws protecting the rights of Commoners. Many of these laws are the underpinning of our legal system itself.”

Peace Through Action USA’s Peaceful Viewers events gather youth and adults of all ages to learn about civic and social topics with a focus on peace. Using the learning methods of film viewing and group discussion, participants are able to gain knowledge on compassionate living, peaceful practices, and social justice concerns.

Give a gift of money to support Peace Through Action’s mission delivery activities, including our Peaceful Viewers events